I’m a big fan of television. I stumble upon a new show (currently, Supernatural) and I get really invested in it. I pay attention to the characters, their surroundings, and even the music playing in the background. I get really hooked. So it’s really surprising to me that there is a misconception of simplicity on television.

For instance, this summer I discovered Lifetime’s Drop Dead Diva on Netflix. I had heard about it before, and had even seen a preview or two but never truly gave it much thought. Since it kept getting recommended to me by the Netflix gods, I decided to give it a try. I became hooked. But something from the pilot episode kept getting under my nerves, and it wasn’t until I had some research that it came to me. The set underwent some changes since that first episode.

As you can see in the above images, Jane and Stacy are talking on the couch in Stacy’s apartment. It’s a dark couch and if I’m correct, has studded leather arms. However, in the photo under it, you can see Stacy and Fred on a lighter couch with no studded arms. This different angle also shows us that the coffee table has also changed. In the photo to the right, you see a different angle of the kitchen/bar. Paint has changed, but it’s just about the only minor change. The stove and exhaust hood from the pilot are no longer present a few episodes later. Major structural changes have been made. I’ve actually just noticed that in the pilot, there are no levels – it’s all flat – and the dining table is where the bathroom door should be. In the third photo, however, you can see that the level is now split and the dining table is beyond the kitchen/bar.

What about these characters and their storylines demanded these changes? Do these changes generally go unnoticed by the average viewer? I think so. Which is, in a way, very comical. How would you react if your apartment was renovated overnight unbeknownst to you? I take great pleasure in noticing the minor details of television shows – from the outfits to the umbrella stands by the door. Why don’t you? 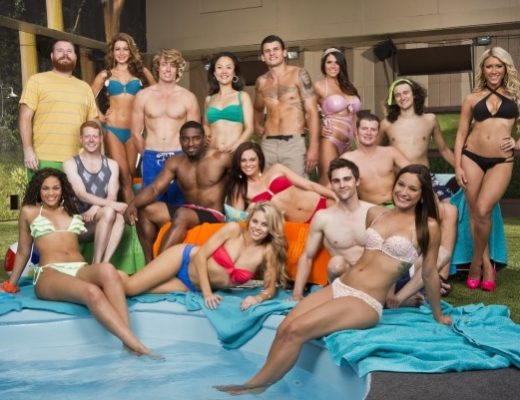